Til We Have Faces

I really, really didn't want to fly back to Ft. Wayne, Indiana for my niece's high school graduation party. Not because I don't love her to bits, but because flying can be so damn traumatic that it often takes me several weeks to recover my balance.

But since my dad passed and my mom's breast cancer has recurred, I figured I should strap myself into a metal canister and be hurtled first to Dallas/Ft. Worth Texas, where my connecting flight was cancelled and I spent the night in the airport on a cot with a "blanket" reminiscent of red rags used by mechanics to wipe the oil from your dipstick, and where, despite my hungry, exhausted, furious state of mind I might have actually been able to get a few hours of sleep if I hadn't froze my ass off all flippin' night because the airport continued to run the AC full blast as if it were the middle of a 107 degree Texas day.

Despite the trauma of getting there, I feel that my visit was fruitful. I tried not to think about my dad's absence too much, or how he would not be there to embrace me at the airport when I finally arrived, or how the last time I saw him was two years prior, saying goodbye at this same airport, not knowing it was our final goodbye.

My mom has been going through daily radiation treatments for the breast cancer which has recurred in her arm. I was able to attend one of her appointments with her oncologist. The doctor came in and told my mom she just needed to see her left leg.

"You need to see my leg?" my mom questioned.

"Yes," the doctor answered. My mom hesitated, blinked, then stood up and pulled her pants down so the doctor could see her leg.

The doctor moved in to look closely at her left thigh.

"What is it you are checking for?" my mother asked.

"Just checking for any redness or signs or irritation from the radiation," the doctor expained.

"Oh," the doctor said. "I'm confusing you with another patient of mine who has cancer in her left leg. Let me see your arm."

I watched the doctor's face and she showed no sign of emotion or embarrassment, made no attempt at a joke to distract us from this error and help us laugh . I know doctors make mistakes just like everyone else, but NOT WITH MY MOTHER, so get it the F@*K together, people.

One night, after staying up way too late and trying to see and do too many people and things in one day, my mom and I were getting ready for bed. I thought of something I needed to ask her so I went to her bedroom. Her lights were off and the door was open. I looked in at her to see if she was still awake and she was laying on her back, fast asleep. Her face looked so lifeless, it scared the shit out of me. I immediately repressed this image and its accompanying thoughts.

The day of the graduation party, my mom spent hours assembling a scrapbook of photos for her granddaughter (my niece) while I composed a long letter to my niece that I had been writing to her in my head for years.

My niece's graduation party was a hit. She put a lot of time and effort into the hot-pink/zebra-striped decor, and all the lovely desserts and other edibles. 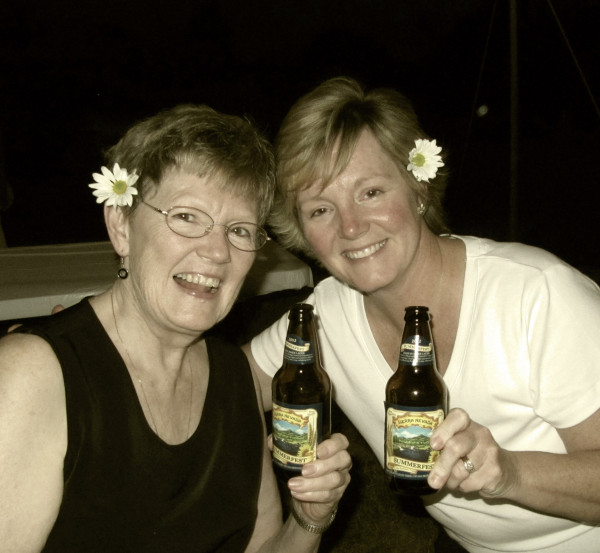 My sister Cathy was positively radiant the whole night. She's doesn't have the angsty glass-is-half-empty genes that I do, but I had not seen her this dance-happy and carefree since she was a teenager.

I went to church with my mom the next morning. My parents were (are) Unitarian Universalists. There was a drum circle workshop led by a Jewish-looking woman before church that my mom and I attended. The workshop leader provided a bunch of instruments for participants to choose from. There were about 14 people in the circle, all ages, from 5 years old to 88 years old. I did some drumming and played a wooden percussion frog and loved it. It made me want to resume my drumming lessons in Chico. Once upon a time I was learning to speak Baba.

After the drum circle, the official service began in the sanctuary. I felt very tender and open. It was the last service led by the interim minister, Rev. Jennie Barrington, who was instrumental in facilitating a wonderful memorial service for my dad. She loves poetry, so she is family in my book. The choir dedicated many songs to her and I cried while grappling with the giant hole that has been punched in Ft. Wayne by my dad's absence and thanking the universe for all the people who have been stepping up to the plate to help my mom.
A friend of my parents, Edith, sat between my mom and I during the service. She is a young, funky, librarian and a really warm-hearted person who is neat to talk to. She has done a lot for my folks over the years and was a consoling presence in the days after my dad died. When my mom's cancer came back a few months later, she stayed the night with my mom after her surgery and made sure she took her pain pills every two hours.

For the last twelve years I have been pining away for close female friendships and a tribe of friends who like to talk about books and art, see films, go hiking, take road trips with, or even just have coffee on a Saturday morning, but I have not been able to find or create this. The few female friends I have in California are exhausted with parenting and don't have much room in their schedules for a child-free friend.

When I was in Ft. Wayne for my dad's funeral in February, I saw clearly that my parents had gathered and grown around them a wonderful garden of friends for the 30 years they had been living in Ft. Wayne and these friendships were blooming like crazy, harvest season was completely upon us and the timing could not have been better. There seemed to be so much love and support coming from these people, super cool articulate people who are artists and musicians and activists, etc. Some of these friends I met for the first time when they brought food over to the house and sat with us and celebrated my dad's life with us. Others I had not seen for nearly two decades, when I hid behind uncombed, bleached bangs avoiding eye-contact with everyone and struggling mightily with my own demons. The sense that I got from many of these people was that I had an automatic in with their tribe by virtue of being my parent's daughter.

So now I'm faced with a lot of questions:

How much time does my mom have left on this planet? Should I move back to Ft. Wayne to be with my mom? Where is this recurrence of her cancer taking us? At age 68, are the final stages of her life right around the corner?

Her breast cancer was stage one when they caught it in 2010. She had a lumpectomy, chemo and radiation. We thought we had dodged the bullet with early detection and treatment. Two years later it reappears in a bone in her arm which automatically makes it stage four.
Am I missing the opportunity to spend my mom's final days with her while also reaping the fruit of friendships my parents have sown which would in turn help me get through everything I am experiencing and facing and fulfill the longing I've had for more than a decade?

Am I romanticizing my parents circle of friends and the U.U. congregation in Ft. Wayne? Do I just think they are wonderful because I don't see them every week? Are they in reality just a bunch of half-baked flakes with brief flashes of love and appeal?  And if so, how does that differ from who I really am? Seriously.

What can I do now to mitigate the inevitable regret that is to come?

I asked the nurse practitioner what my mom's prognosis was she said, "It's hard to say, she could live another 5 - 10 years, maybe more."  How should I take that?  If my mom has five or less years to live I would like to be with her. If she is going to live an active life for another 10 + years I would still like to go back for a while, but could do a bit more planning and saving for it.

I loathed Ft. Wayne so damn much when I lived there almost two decades ago. The winters are eternally grey and morbidly depressing. The humidity is so oppressive it squashes the joy out of everything that is not air-conditioned. There are no great sanctuaries of nature in which to escape.  And it's a red state. I don't want to live in a red state. I moved to California to get away from those narrow-minded, culturally backward fucktards.

And then there's the question of my boyfriend. I know he would not move to Indiana with me, but I think he would understand if I needed to go....but would he make me feel guilty and would there be more regret if I left?

My mom told me that she had a dream recently about my dad. In the dream he would not let her look at his face, but they held hands and my mom described it as very peaceful. I could focus on the peace, couldn't I? But no, I am disturbed by why he did not want her to look at his face. Years before he died he made a decision to donate his body to Indiana Univeristy School of Medicine. All I can think is, have they done something to his face? And, why doesn't my dad come to me in my dreams? But perhaps without his face, I am not ready to see him again.
Tags: family
Subscribe