After San Francisco we headed south to the sand dune town of Marina, just a few miles north of the Monterey Peninsula. We checked into our hotel around 6:00 pm and rushed to the nearest beach to catch a phenomenal sunset. 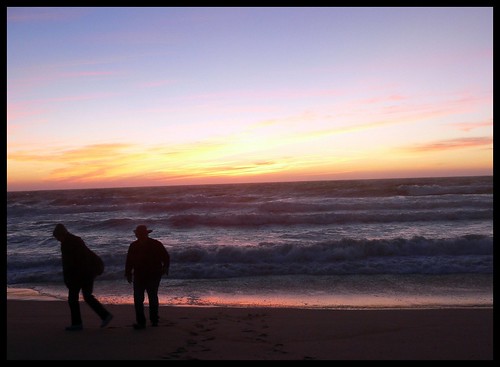 None of us had ever eaten Korean food before so we had no idea what we were getting ourselves into. My Mom and I played it safe and decided to split an order of "Tofu and Vegetables." My Dad ordered "Beef and Vegetables" with the beef on the side (this cracked my Mother and I up -- that's pretty much like ordering lasagna with the noodles on the side, wouldn't you say?).

Anyway, what the waitress delivered to our table will be the subject of a humorous yet cautionary tale passed down in my family through the generations for at least the next few weeks.

What came to our table was a large tray with 8-10 small white bowls, each filled with an unidentifiable "vegetable" matter. We politely thanked the waitress and waited until she was out of ear shot before we started in with the what in the hell have we got here jokes. My Mom thought it was the discarded remains from a fisherman's bait bucket. I wondered if it was the same organic sea debris we had just seen washed up on the shore.

We started forking small portions of the more edible-looking matter onto our plates. One bowl contained rubbery minnows (none for me, thank you). Another had white blubbery chunks in it. Other bowls held what looked like fried grass. I thought I recognized a form of zucchini in another.

In the spirit of adventure I tried to shirk off my narrow, white American culinary expectations and experience something new. I stabbed some of the blubbery substance onto my fork and gave it a go. It was soft and actually kind-of tasty truth be told, but I couldn't get past the fact that I didn't know what the hell it was. It could have been octopus testicles for all I knew!

We ate as much as we could. My Dad even ate some of the minnows. "Oh God, they're chewy!", he said as he ate them.

The next morning we explored the Carmel River State Beach. Here's some sea matter that looks suspiciously like our dinner at the Korean BBQ. I just now googled "Korean cuisine" and it's true! Seaweed and other algae are part of a balanced Korean diet. 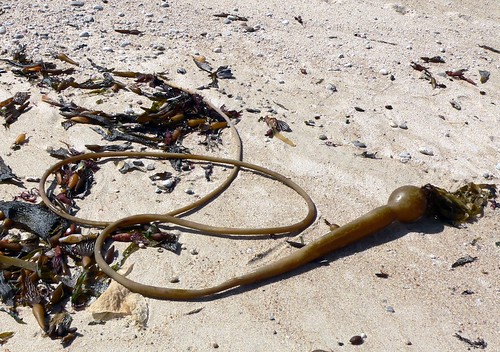 My Dad dared my Mom to pick up this thick, ropey strand of seaweed. She was apprehensive at first, but figured, what the hell we were putting this stuff in our mouths the night before. She said it felt like a garden hose. The part she's holding on to is called the "stipe." Finally, the mystery of Michael Stipe's last name is revealed! From here on out you can think of him as "Michael Seaweed Stem." I know I will. 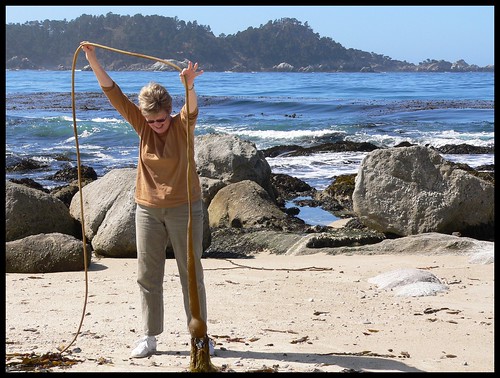