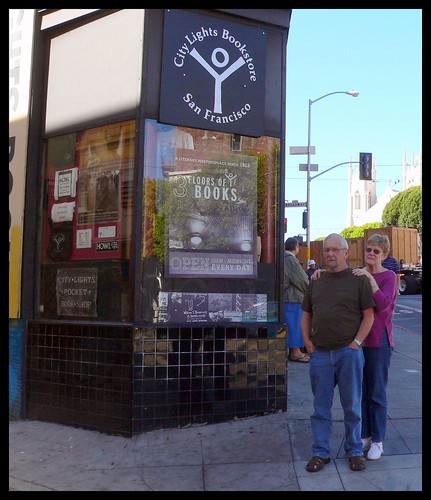 My folks and I went on a literary pilgrimage of sorts. Our first destination was City Lights Bookstore in San Francisco's Italian-American district--- better known as "North Beach." North Beach was once a low-rent bohemian scene where Ginsburg, Burroughs, Kerouac, Neal Cassady, Gary Snyder, Ruth Weiss and other artists, musicians and free-spirits lived, wrote and played.

City Lights Bookstore was co-founded in 1953 by Lawrence Ferlinghetti. This bookstore shared the same name with Ferlinghetti's pop-culture magazine City Lights. A few years later a publishing wing was formed. In 1956 City Lights published Ginsburg's Howl and Other Poems and gained notoriety from the obcenity trial which followed.

My Dad refers to the first time he heard a reading of Howl as a pivitol point in his existence. He's also a big Kerouac fan, but made a point of telling me several times, "These guys are assholes, I hope you know that. I used to like them but they're all just a bunch of cock-sucking assholes." Don't get me wrong, he's got no problem with guys sucking cock. I'm not sure what the problem is, but it's not that. Later he told me Kerouac's The Town and The City is his favorite. 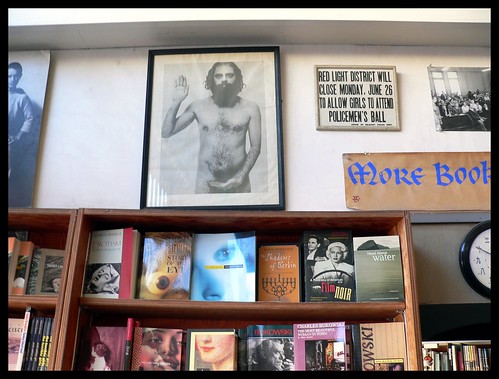 A few years ago my Dad wrote these lines about Ginsberg: I heard Allen read (perform?) "Kaddish" in Kansas City back in the early 70s at the University of Missouri, the place was packed with neo-beats, long haired, tofu-sucking, kelp-eating, new-age hippie freaks; the type of people Jack Kerouac held in the highest disregard. The whole scene turned me off...

I could have browsed for days in City Lights Bookstore. I showed considerable restraint and acquired only a copy of Carson McCullers' The Member of the Wedding which was recommended to me by one of favorite ljers

robin_rule and seconded by my Father. I also picked up an issue of "Cometbus." Maybe I'm a girl with low ambitions but I think you've done something pretty cool when City Lights sells copies of your zine.

These are the stairs leading to City Light's famous poetry room. Poetry books I was sorely tempted to acquire included Poems from Guantanamo, The McSweeney's Book of Poets Picking Poets and The Essential Neruda. 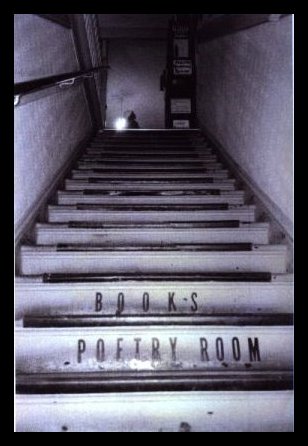