I just finished reading Sherman Alexie's Flight, which, by the way, I don't think can be classified as magical realism. Flight's language is simple and the story is compelling. It addresses some of my favorite themes: identity, shame, betrayal, justice, revenge and redemption. This book would be an excellent read for high schoolers and I hope teachers will begin using it, SOON! (Although I'm sure the occasional f-bomb will cause a stink among the narrow minded set). 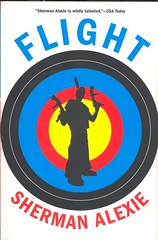 Part of me wants to say that Flight isn't Alexie's best work in a literary sense. His 1993 book, Lone Ranger and Tonto Fist Fight in Heaven, remains in my mind, better. But Flight was useful and freeing for me in a couple of different ways that Alexie's other works have not been---

1. Flight made me realize that writing doesn't have to be so fucking complex in order to be good.

2. As a person who loves to cart around a boat-load of white, middle-class, American guilt, this novel was liberating.
Collapse