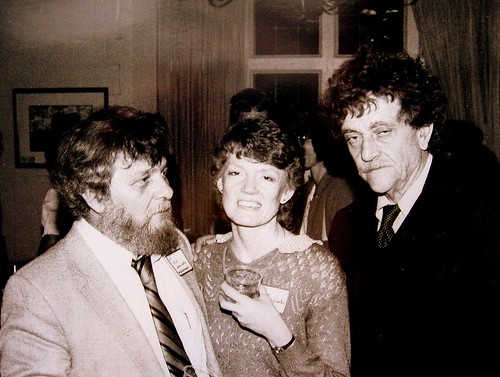 My parents with Kurt Vonnegut, April 18, 1985, University of Toledo.

This is what my Dad has to say about meeting one of his "literary heros":

...the meeting was fantastic; [Vonnegut] did not disappoint me as other authors I worked with in my long and checkered career selling books have. [Specific person] was the manager of the [big chain bookstore] in Toledo, I the district manager. When she told me that the University of Toledo had approached her about selling books at the lecture and after I changed my pissed in pants I put into motion the idea of a reception. This was not a gig from corporate but one of my own making. I, as district manager, supplied the wine and cheese ([Big Chain Bookstore's] money), [Specific person] and her crew of booksellers assisted: I had them all wear a name tag that included the phrase “HI-HOst” or “HI-HOstess”. Kurt got a kick out of that. We had an amicable chat, both of us decrying the affect of the big chain book stores on the literary scene. After he left, I pilfered a long cigarette butt of his from an ashtray. I still have that Pall Mall, stuck in the base of a bust of Mark Twain. “So it goes.”

It isn’t often that one gets to meet another human to whom one assigns the status of “Hero”, approaching godhood: further it is all too often that upon meeting one’s Hero that there is disappointment or often a tremendous let down at griping the flesh (shaking hands). I was not let down nor disappointed; Vonnegut continues to rule in my pantheon of literary gods.

In the late 1970's - early 80's my Dad owned and operated his own bookstore in downtown Jefferson City, Missouri which he named, "The Mark Twain Bookstore." I was just a kid but I remember he also used the big room upstairs as an art gallery. My Dad was forced out of business when a new concept came to town called "the mall" which came complete with a big chain bookstore and essentially killed most of the downtown businesses. Because he had three young daughters to support he had little choice but to go and work for big chain bookstore. I remember this being a very difficult time for our family because my father's dream of having his own bookstore had been shattered. I also remember going to see my Dad at "the mall" where he took me to my first arcade and taught me how to play this crazy fun new video game called "Pac-Man." He was promoted up the ranks pretty quickly and we followed his promotions to Ft. Wayne, Indiana. His career with big chain bookstore only lasted for a few years before he moved on to other work but his passion for books never waned.
Collapse